The spring 2018 banding season was very cool during April and very wet during May, and as a result only 16 (out of 18 possible) days were covered, between April 7 and June 3. The total of 1199 new birds banded was the second highest spring season ever (2017 was a record with 1301). Species diversity was a record high, with 77 species banded. The totals banded are shown below, with the standardized capture rate (number per 100 net hours) in parentheses.

The last part of spring migration continued to be interesting, bird-wise, but remained challenging as far as the weather. Of the 5 banding days detailed below, rain delayed opening the nets on one day, a shortage of volunteers on two days only allowed 11.5 nets to be opened instead of 17.5, rain forced early close on one day, and high heat and humidity forced early close on one day. Despite that, the spring season ended up with 1199 birds banded (2nd highest ever) of 77 species (highest ever in spring), with a lot of interesting highlights.

Highlights of the 60 birds banded on May 19 included two Ruby-throated Hummingbirds, and two Great Crested Flycatchers, both on the same net run.

For some reason, still unknown, Tennessee Warblers are rarely captured in spring at this site. Maybe they tend to forage higher in the trees/shrubs than the hatch-year birds do in fall? So odd as it may seem, they are a very infrequent capture and today's female was only the second of the spring. Compare this photo with that of the male we caught earlier in the month (previous blog post).


The spring's 3rd Northern Parula was another highlight, and the season's first Black-throated Blue Warbler (a female) was also captured today. Interesting birds observed, but not banded, included a somewhat late Ruby-crowned Kinglet, and Chestnut-sided, Blackburnian, and Blackpoll warblers.

Highlights of the 70 birds banded on May 25 included a good influx of Empidonax flycatchers, with the first Yellow-bellied, Willow, and Alder Flycatchers of the spring.

Warblers continued, with the expected late spring species including the first (2) Mourning Warblers.

Probably the most exciting bird of the day was this female Connecticut Warbler, which was the second of the season. Normally, only one per year is banded in this park, and most often in the fall.


The complete white eye ring, large bill, and lack of black on the breast, are all good field marks for distinguishing Connecticut Warbler from Mourning Warbler. Another field mark that has been presented in field guides, but also in banding references, is the length of the undertail coverts. Personally, I do not find this very useful since both species are often seen below eye level, making it difficult to see these feathers. But in-hand it can be seen well, and today we had a chance to compare both species undertail coverts side-by-side, with Connecticut showing distinctively longer coverts.


Interesting birds observed, but not banded, included a singing Blue-winged Warbler, and a singing male Connecticut Warbler that was heard near the nature center from the banding table, at the same time as we had our female in-hand!

Highlights of the 48 birds banded on May 27 included two Ruby-throated Hummingbirds, and it was another good day for flycatchers. After hearing them in the area for a while, we caught our first Eastern Wood-Pewees (2) today.


Pewees differ from Empidonax flycatchers by being a bit larger, having longer tails and wings, and instead of having an eye ring, they just have a pale crescent behind the eye.


Of the 15 Empidonax flycatchers banded today, 1 was Yellow-bellied, 10 keyed out to Alder, 2 keyed out to Willow, and 2 remained as "Traill's. Perhaps the most amazing bird banded today was the THIRD Connecticut Warbler of the spring. Most interesting is that it was captured in the same net as the previous two this spring.


Interesting birds observed, but not banded, included a singing Blackpoll Warbler, and a singing second-year male Orchard Oriole which was the first noted int he banding area since we banded one earlier in the month.

Highlights of the 42 birds banded on June 1 included 2 Ruby-throated Hummingbirds, and another good bunch of Empidonax flycatchers; 1 Yellow-bellied, 5 Willow, 1 Alder, and 4 "Traill's". After hearing and seeing them in the banding area for a while, we finally caught the first Cedar Waxwings (2) of the spring today.


To day that this new "meadow" station is good for Yellow Warblers would be an understatement. Today we banded 5 more, bringing the season total of new banded, plus 24 returnees from previous years to 100...


Despite being a common bird generally, Chipping Sparrows have only rarely been banded in the park. The singing male that we watched fly into a net, and the female we captured at the same time with a brood patch, were only the 4th and 5th banded here (the first was in 2007 at the "marsh" station), and the first in spring.


Having both male and female in-hand at the same time, only subtle differences were noted that might pertain to their sex, or could just be individual variation. The female had a bit more black streaking at the rear of her rufous cap.

Chipping Sparrows have all-black bills in summer, and pinkish bills in winter, which helps distinguish them from similar sparrows.


Considered a rarity on eBird, but captured annually in this park in the first few days of June, was this Lincoln's Sparrow. An isolated breeding colony exists less than 100 miles north of the park in Sanilac County, with the main breeding areas in northern Michigan and farther north.


The season's second Indigo Bunting, another molting male, was definitely a highlight. Also the second for the season, but only the 5th ever in the park (and 4th at the "meadow" station) was this second-year male Orchard Oriole.


Interesting birds observed, but not banded, included a calling Blue-gray Gnatcatcher, and late Chestnut-sided and Magnolia Warblers. As the day warmed up, and we were catching fewer birds, my attention turned to other creatures in the banding area. A very large bullfrog was sitting near the channel almost all day, so was an inviting "photo op".


Begging to be photographed was this smallish (12-inches long) Snapping Turtle that walked across the road only a few yards from the banding table.

As it got sunner and warmer, many dragonflies became active. One that got tangled in a mist net, but luckily could be safely extracted, was this very large Swamp Darner (it is slightly longer than the common and familiar Green Darner).

Unlike some darners, this species can be readily identified by the paired narrow green rings on its abdomen. They have a substantial bite too!


We see Swamp Darners annually in the park, from late May into August, and unfortunately some are tangled in our nets. They are generally not very widespread in the state, as the map from the Michigan Odonata Survey below shows. 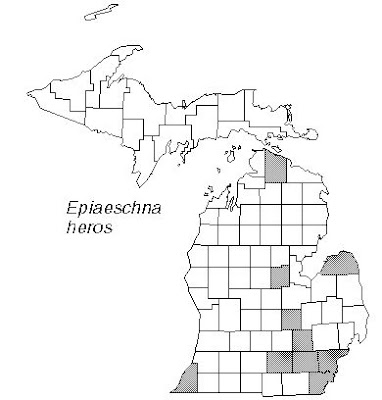 Other common dragonfly species became active, including this male Blue Dasher. These photos are a good demonstration that the best lens for photographing dragonflies is a 400mm telephoto lens, not a macro lens...

And one dragonfly species that caught my eye turned out to be a new species for the park list, Racket-tailed Emerald.

Highlights of the 20 birds banded on June 3 included yet another good catch of flycatchers; Eastern Wood-Pewee (1), Yellow-bellied Flycatcher (1), Willow Flycatcher (1), Alder Flycatcher (1), and "Traill's" Flycatcher (2). It seems that the migration of Empidonax flycatchers may continue into mid-June this year! A surprising first for the spring was a Brown Thrasher, which is an infrequently captured species, and usually not so late in the season.


The only migrant warbler captured today was an expected species that is typically late, a Canada Warbler.


By this time of year, we usually start catching the first fledglings of the year. Normally, they would be American Robins, and sometimes have been Common Grackles or European Starlings. This spring, no juveniles of those have been captured. Instead, the only hatch-year of the spring was a complete surprise, this hatch-year male Pine Siskin!


So, the season ends with a bird more typical of March than of June; very fitting since April was also a lot like March.

Banding can not be done at this location without the help of volunteers, who help carry net poles, nets and other equipment, through mud and water to set up and take down the station every day. Thanks to those who helped on these 5 days: Mike Charlebois, Guadalupe Cummins, Stevie Kuroda, Dave Lancaster, Bruce Watson, Blanche Wicke, Christian Zammit, and Julian Zammit.

Posted by Allen Chartier at 8:24 PM No comments: