The first week of June is the last week of spring banding at this site every year. Some years there are migrants still moving through, while in other years migration has ended and nesting is well underway in the area. This year, it was mostly the latter, and only one banding day (Friday June 6) could be scheduled due to the limited availability of volunteers. Highlights of that banding day are described below, followed by a brief summary of the entire spring season.

Highlights of the 28 birds banded on Friday, June 6 included a Ruby-throated Hummingbird; this one an adult female that was showing signs of breeding locally.

A single Empidonax flycatcher was banded today. This one keyed out to Alder Flycatcher, which makes it a likely migrant as they rarely summer here, with Willow breeding annually. It was the only migrant captured today. Banding volunteer, Marie McGee, suggested that I explain how these flycatchers are identified. I hope I can do it accurately and concisely, without being too boring...


Keying out Willow and Alder flycatchers requires taking a number of precise measurements that can be tricky to obtain on a squirming bird in-hand. The chart below, shown in the Pyle guide that all North American banders use, shows a scatter plot with Willow on one side, Alder on the other, and a zone of overlap along a median line. Along the X-axis is a "wing formula", which is something our European colleagues are used to doing with a number of their warbler species. It consists of the difference between two measurements of primary lengths, all done on the closed wing, which only increases the degree of difficulty. Formula I is the difference between the longest primary and the 6th primary, minus the difference between the 10th primary and the 5th primary; the latter is a negative number of the 10th primary is longer than the 5th. On the bird above, Longest primary minus the 6th was 4.7mm, and p10 minus p5 was -0.5, so the Formula I value is 5.2mm. The Y-axis is the length of the bill measured from the front of the nostrils (nares) to the tip. On this bird it was 7.9mm. So, using the top chart for adults in spring (the bottom chart is only for hatch-year birds in fall), the intersection of these two values is approximately at the tip of the arrow, which is well within the range for Alder Flycatcher. It does take a bit of practice to do this quickly, but accurately, especially on busy days. And, in my experience about 50% of them fall in the overlap zone and remain as "Traill's" Flycatcher.

A couple of Common Yellowthroats were banded today, including this female that decided she'd sit in my hand after being released. After about a minute, she flew off strongly.


American Goldfinches have not been in the highlights for a while, and the number of newly banded this spring was only about average (51), after record numbers last year both in spring and fall. Those records surely contributed to the greater than normal number of returnees from previous years, which included: 1 from 2008, 1 from 2011, 3 from 2012, 9 from spring 2013, and 32 from fall 2013. 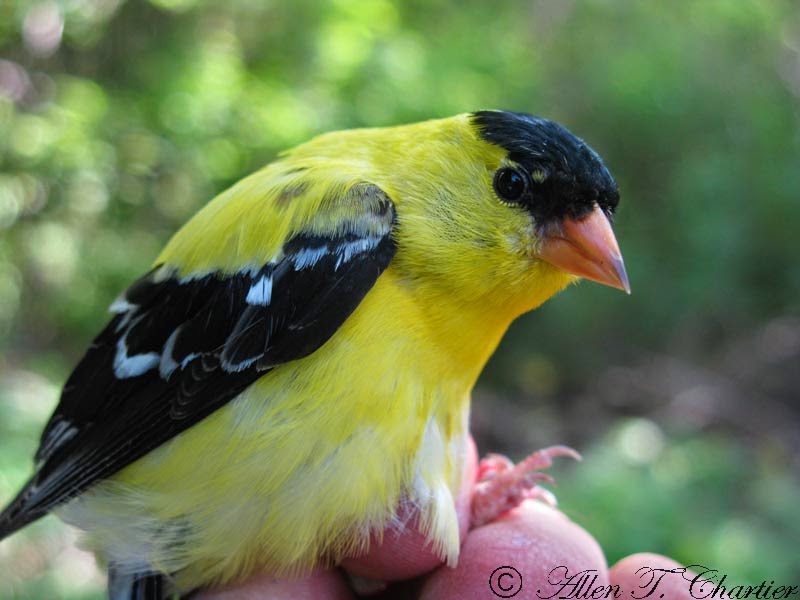 The final bird banded of spring 2013 was this second-year female Common Yellowthroat (the 36th of the spring). She is showing rusty on the forehead that some individuals have.

The spring of 2014 was interesting for some great highlights, but had the lowest number of species banded (59) since banding was re-started here in 2004; and only 5 of the years between 1990-1999 had a lower species total. The 656 individuals banded ranked this spring 7th among the last 11 spring seasons, so well below average. Poor showings of thrushes and warblers contributed, in addition to the profoundly low number of White-throated Sparrows. In some ways, migration seemed to pass us by, even though other locales in southeastern Michigan had a pretty good spring.

Things start slowing down in late May, and we start looking forward to the first hatch-year birds of the year. What species will it be? Very few migrants are left, and most of the resident birds are showing signs of breeding. Weather was good on both days this week, but the results did vary.

Highlights of the 36 birds banded, and 13 recaptured, on Thursday May 29 included a good total of 6 Empidonax flycatchers. All of them were of the Willow/Alder species pair, called Traill's Flycatcher when they cannot be identified any further. Of the 5 new banded Empids, the measurements of 4 of them enabled them to be keyed out to species; 1 was Willow and 3 were Alder.

Not exactly a highlight, the number of European Starlings banded this spring has been more than normal. Some years none are banded. An adult female banded today had an apparently unusual eye color. I don't know if this is age related, or just a variation.


The number of Yellow Warblers banded this year in the 7-acres encompassed by the 14 nets has been very good, with 35 new banded, and in addition there have been 25 returnees from previous years. Among the returnees have been a few banded in 2008, including the individual below banded (as AHY) in 2008.

Highlights of the 35 birds banded, and 26 recaptured, on Saturday May 31 included an adult male Ruby-throated Hummingbird...always a highlight and a privilege to band.


Some males show a distinct purple iridescence on their tails, though this is difficult to photograph well.


A Hairy Woodpecker was a nice catch, as they are infrequently banded here.

More Empidonax flycatchers were captured today, including one returning bird; banded in 2012. Its measurements did not allow it to be keyed out to species, and when recaptured in 2013 it was the same. So it was not surprising that when remeasured again today, it still did not key out! Most likely it is a Willow Flycatcher since that is the most frequent species nesting in the park, with Alder occurring in summer perhaps only one summer out of five.

Among the three Northern Rough-winged Swallows captured today was one that had been banded in 2013; the first returnee of this species from a previous year at this station.

The species gets its name from small, hook-like structures long the leading edge of the outermost primary, on the males only. This can be seen in the photo below.


A single migrant warbler was banded today, a female Blackpoll Warbler, which was a bit of a surprise. Blackpolls are banded annually in the fall, sometimes in good numbers, but this is the first one in spring since 1998, and only 5 were banded between 1993 and 1998.

As anticipated, the first young of the year were captured today, including an American Robin and a European Starling.

In the early afternoon, when things were starting to get really slow, one of the volunteers (Jacob Charlebois) extracted a Swainson's Thrush from a net close to where we band along the road. It was a banded bird, so naturally I presumed it was the Swainson's I'd banded in the morning.


But when I looked at the band, I said "wow" or something... The numbers were all along the bottom of the band, with the inscription at the top being "Tierradeaves.com", and a small "c" above the numbers. It was the first ever INTERNATIONAL recapture at this station!


I immediately recognized this organization as that operated by Manuel Grosselet, who bands at a station in Veracruz, Mexico! I emailed Manuel when I still had the bird in my hand, and heard back from him later in the evening. This Swainson's Thrush was banded on May 7, 2014 at the Observatorio de Aves del Pantano de Santa Alejandrina (OAPSA), which is east of Minatitlan, Veracruz. This bird traveled over 2900 kilometers NNE in only 24 days, if it went in a straight line, to get to Michigan from Mexico. But it may have actually flown around the Gulf of Mexico through Texas, probably extending its trip by a few hundred kilometers. A Google map of the banding site and re-encounter site is shown below.


And below are Google maps of the banding site, and re-encounter site, to show surrounding habitat. Yellow pins show the precise locations.

And here is Jacob with "his" Mexican Swainson's Thrush.

But the day was not over, and another strange bird was captured. But this one had to be released unbanded, because my banding permit does not include waterfowl.


This female Wood Duck was kinder to my net than the female Mallard that tried to land in a net last week...she put two large holes in it. This duck did no damage to the net. Although I could not band her, I still brought her back to the station to take photo, and for everyone to admire her plumage.

I also was curious to see if I could age her, using the Pyle guide. One volunteer commented that it looked like she was helping out...

It appears that she was a second-year based on the relative lack of iridescence on her back, and the short extension of white behind the eye, which was only 15 mm (20mm or more is ASY).


Interesting birds observed but not banded included an American Woodcock flushed from near the Upland Nets, and single singing Red-eyed Vireo, Bay-breasted Warbler, and American Redstart.