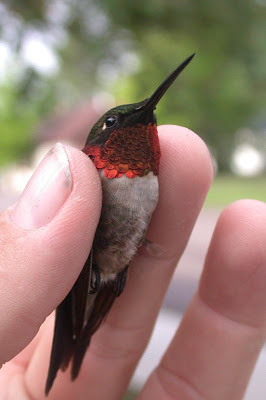 Reality has a way of altering good intentions. It was my intention to post about my hummingbird banding throughout the summer. The reality was that I had gotten a paying gig as a field biologist for the Michigan Breeding Bird Atlas which meant I was traveling up to Macomb and St. Clair counties in the pre-dawn darkness up to four days a week, and getting home around dinner time, and spending the evening transferring my data to the data cards. On the other days, I was able to band hummingbirds, but blogging just never made the priority list. I have a t-shirt that says "Life is simple: Eat, Sleep, Bird". Well, this Atlasing gig made the first one of those three possible while at the same time making the second one much more necessary! The upside was that I was able to bird/survey some interesting areas.
Over the summer I did manage to visit at least 20 of the 40+ banding sites that I normally visit. Despite the reduced coverage, I was able to band a total of 263 Ruby-throated Hummingbirds during June and July. This compares favorably with 265 in summer of 2007, 240 in summer of 2006, and 335 in summer 2005 (which included 117 banded in the Upper Peninsula). In addition to documenting the breeding populations, returning birds, longevity (including 3 birds that are now at least 6 years old), and breeding timing, there were other interesting observations from this summer. One of these included an adult female with a crossed bill. 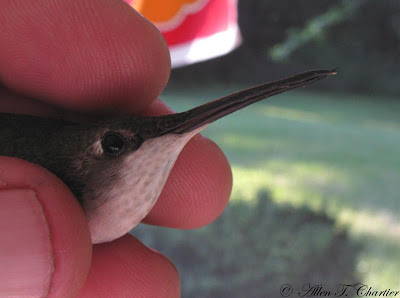 At another locale, another adult female was showing several white feathers on her forehead. This is something I regularly encounter at the few sites were I band a lot of birds (50+ per season per locale). This plumage condition is called albinism, though sometimes when only a few feathers are involved it is called (inaccurately) "partial" albinism. 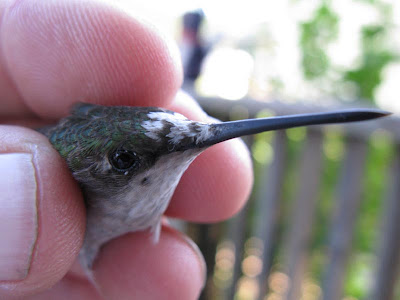 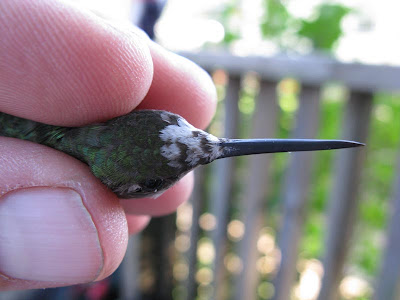 Another odd plumage condition is called Leucism, which is a fading of the pigment in the feathers. I captured this molting adult female, which the homeowner called "Gray Girl", which was a very pale grayish-green on the upperparts. Given that the iridescense of hummingbird feathers is due to microscopic structures, I'm not sure how the fading happens as there is no green pigment in bird feathers. 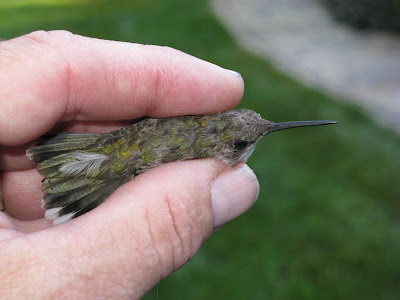 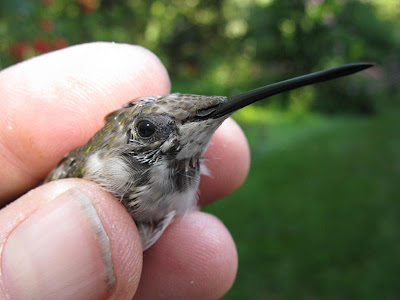 Ruby-throated Hummingbird molt is not well documented in our region, and it is one major aspect of my research. Also, as July comes to a close, I begin anticipating the capture of the first hatch-year (young) of the summer. Although I've banded nestlings that have left the nest earlier, I've so far never banded a young hummer at a feeder before July 25. This year the first one was on August 1. Hatch year birds are in very fresh, pristine plumage which is quite a contrast to the molting adults. 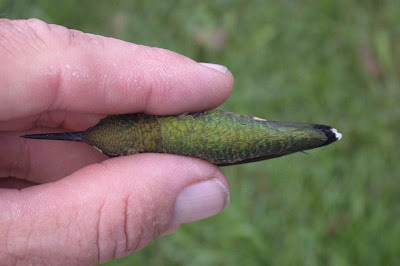 My next good intention is to post the results of my "fall" banding, which will cover all hummingbird banding activity during August and September.
Posted by Allen Chartier at 8:14 PM 4 comments: