Despite the title of my blog, I don't often post about Ruby-throated Hummingbirds, and my research, during the summer months. One reason is that my efforts take up a lot of my time, involving visits to at least 20 sites each month, most of which are private residences ranging from 50-150 miles from home. Another reason is that, despite all the good data that is gathered and summarized at the end of each year, the highlights are typically in the overall effort, and not so much in the individual daily efforts.

This year is a bit different. Back on June 29 I recaptured an adult male Ruby-throated Hummingbird at a residence in Sandstone Township, Jackson County, Michigan, that I had banded at that same site as an adult in June 2010. This makes him at least 7 years old; or after 7th year in banding terminology. A photo of this bird is below. The record for male Ruby-throats is 7 years 8 months, and for females is 9 years 2 months.


Another interesting development has been that a homeowner in St. Joseph County, southwestern Michigan, has been having phenomenal success in locating Ruby-throated Hummingbird nests on his property. Last summer, he found 7 nests in an area of about 2 acres, and this year he's up to 22 nests! This is completely unprecedented in the known biology of this species, and we (Rich and Brenda Keith and I), are working on documenting what is going on here for eventual publication. Last week, we visited this site to band nestlings in some of these nests, succeeding in banding 8 young from 4 nests (some easily within sight of each other). The homeowner is a construction contractor, so it is incredibly convenient that he has equipment available to get us up to the nests, which have ranged from 14-30 feet above the ground. In the photos below, taken by Brenda, Rich and I are banding nestlings from one nest visible from the back deck of the home. 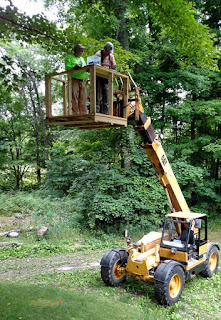 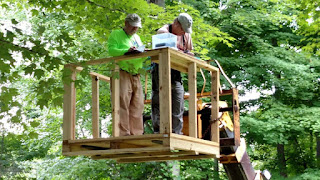 The homeowner has built a banding "table" on the lift, allowing safe conditions for banding these birds. Some of the banding materials are shown in the photo below, along with two baby hummingbirds waiting to be banded. 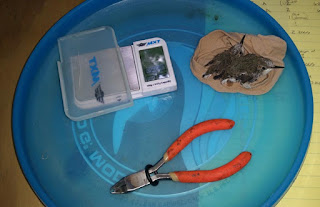 Some might wonder what the blue Frisbee is for. It is a precaution when removing the baby hummingbirds from the nest, and replacing them. We hold the frisbee under the nest just in case one jumps out. Over the years, that has never happened, and last year one nestling fledged when I got up to the nest, but it flew off very strongly past my head. The young hummingbirds need to be at least 12 days old before their legs are big enough to hold a band, and we have to also band them before they fledge, which on average is 18-21 days old (but up to 28 days in chilly summers with few insects). Here is the first nest we banded young in, which was fairly typical. 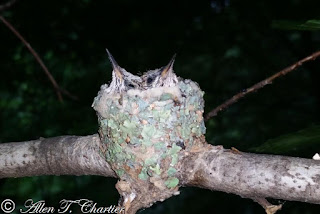 One of the other nests, shown below, was a bit unusual in that there was a dangling portion of the nest that I'd never seen before, and perhaps hasn't been previously documented. 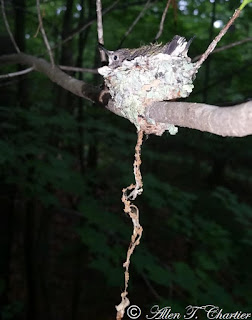 There are at least three more nests with eggs or young, some possibly second nests, that we might have the opportunity to band young from in the coming 2-3 weeks. I will post further developments on this at the end of the summer banding season.

Nearby, on July 11, our team of six (2 banders, 2 recorders, and 2 removing birds from traps) captured and banded 152 Ruby-throated Hummingbirds, and 63 additional birds returning from previous years. It goes without saying that this is our "best" site! When we arrived, it appeared that it would not be this busy, as only about 20 hummingbirds were visiting the 40+ feeders at this home. Most years, there are usually at least twice that many visible at once.