This winter has seen what is perhaps the largest irruption in history of White-winged Crossbills into Michigan's Lower Peninsula. Yooper birders may find this all very ordinary, as this species occurs there in variable numbers every winter, and breeds as well. And, the species has wandered to our southernmost counties in previous irruptions...photos I have from 1981 and 1998 are evidence of this. But, this time, they are so widespread that any birder looking for them has been able to find them almost anywhere they look. Cemeteries often contain good numbers of conifers, and indeed the locales where crossbills have been found this winter reads like a directory of cemeteries for the state! Many birders are checking throughout the state to document this major irruption, and the results are being tabulated and mapped on a website at:
www.amazilia.net/WWCR.htm
Photographers have been having a great time trying to catch up with these nomadic birds, trying to catch them in good light and low down in the trees. My own success has been moderate, as evidenced by the male in the photo below. 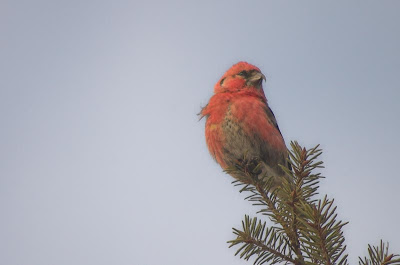 Conventional wisdom indicates that White-winged Crossbills prefer to feed on spruce cones, while Red Crossbills prefer to feed on pines. There have been only a very few Red Crossbills reported in this winter's irruption in the Lower Peninsula. And, the White-winged Crossbills have been seen feeding not only on spruces, but also on White Pine, Tamarack, and Douglas-fir. And a very few individuals have been reported visiting feeders.
This irruption has also reached well into Ohio, Illinois, and Indiana, and there are also reports from Iowa and West Virginia. Most of the photos I've seen have focused on adult males, which is understandable given their bright colors. But the females are subtly beautiful too, and I've posted one of my photos of a female here partly to show that, and partly because it is one of the better photos I have so far! 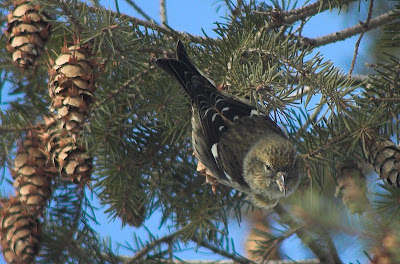 Posted by Allen Chartier at 8:44 AM 2 comments: