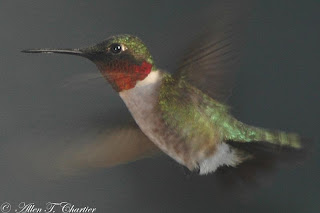 Beginning in June, I turn my attention away from songbird banding to focus on Ruby-throated Hummingbirds. My 2012 Hummingbird Banding Summary has finally been completed, and can be found here. This year, my hummingbird banding season began at a location in Calhoun County, Michigan where I normally band 100+ over the summer season, typically in three visits (June, July, and August). I chose to start at this location because I had invited an NPR reporter, Rebecca Williams, who does the Environment Report for Michigan Radio to accompany us for a report she was doing on volunteer research in Michigan. Her four minute report, distilled down from the three hours she spent with us (Rich and Brenda Keith, Jo Ellen Van Galder, and the homeowner Mary Bird) aired on June 20, 2013, and you can listen to it here. 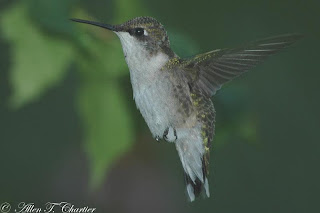 First, a majority of homeowners hosting hummingbirds throughout Michigan are not "birders" in the sense that many of us think of birders; they do not own binoculars or a field guide, and don't travel anywhere to look at birds. And they often do not write down notes about their hummingbirds, but instead rely on memory. Often, the memory of the previous year's numbers are based on the swarms of birds that they may have had during August, when all the young are fledged and visiting feeders, as well as migrating adult males, and adult females that are then free of nesting duties and also visiting feeders again. Many do not remember that fewer birds arrived in spring than they had in late summer. This explains to quite a few people why they seem have fewer hummingbirds right now in early summer.

Second is another issue related to observer's memory of the previous year, which relates to the annual cycle of Ruby-throated Hummingbirds. When they arrive in early to mid-May, the females begin building their nests, with no help from the males. At this time, both males and females frequently visit feeders. Once their nests are completed, after a week or ten days, they lay their eggs and begin incubation, again with no help from the males. Females can spend up to three hours on the nest, and when they take breaks for food the tend not to travel far, so they can get right back to the nest. This results in far fewer visits to feeders by females. The males, being focused on defending feeding territories, and mating with females, often disperse at this time because of the lack of females to chase, and also because wild food sources begin to become more frequent, resulting in fewer feeder visits by males as well. After about 14 days, the eggs hatch and the females, still without any help from the males, begin feeding the nestlings which will leave the nest at an age of 18-22 days (one year, with a cool, wet summer, it took 29 days). They feed their young almost entirely insects, which means that they are not going to visit feeders very often during this time either.

My third response relates simply to variations in populations between years, and between locations. There is a tendency to judge an entire state, or even the entire breeding range of a species, based on observations in your own back yard. This is not wise! Every year I conduct more than a dozen programs on hummingbirds, including some where I demonstrate hummingbird banding. At these events, I often query the audience about how many of them are observing fewer hummingbirds than what they consider normal. Typically, about 10-15% of the audience will raise their hands. This is the "vocal minority" of observers that are the source of all the "where are my hummingirds?" queries! I then ask, how many people have more than normal, and often 10-15% will raise their hands. This leaves 70-80% who have about normal numbers. I have been doing this for about 10 years, and the response has been remarkably consistent. Even at the most recent event, at Lake Hope State Park, in southeastern Ohio (where I banded 33 hummers in 1 1/2 hours), the response was about the same. 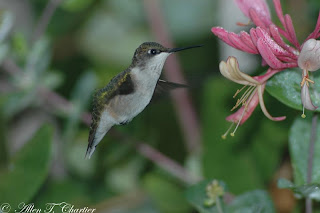 But this year, especially in the more northern regions, something seems to be different. The number of observers reporting lower numbers seems to be much higher. As I've now visited a number of sites where I typically band good numbers, there seems to be some solid evidence for numbers being down at a lot of places. At sites where I expect to band maybe 20-30 hummingbirds in a couple hours, I've been banding only 10 or so, with similar effort to previous years. The standardization of effort is the most important part, if this year's numbers are to be properly documented. Decreased effort, due to a lack of birds, will skew the data to fewer birds, so it is important to put in a similar effort to previous years. The summer season is not over, so I will be continuing to try to band as much as I have in previous years. However, there is some contradictory evidence to this preliminary data.  I have added two new banding sites this year, which have both had good numbers of birds; 17 banded in two hours at a location in Lyndon Twp., Washtenaw County, and 30 banded in two hours at a location near Montgomery, Hillsdale County. 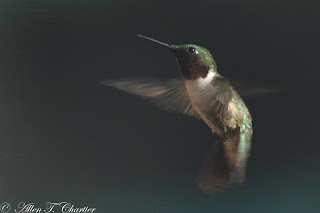 Documenting population cycles is an important part of the hummingbird research of my Great Lakes HummerNet project. Finding explanations for increases or decreases is much more difficult. In thinking about this over the past couple of months, I think that we can rule out any concerns about the spring migration being "late", because in reality it was only later than the very odd 2012 spring season, with the weather conditions this year being typical of springs from the 1970s and 1980s. This can be verified by looking at the Spring Migration Maps that I've been producing since 2001. One explanation that seems to make sense to me is a possible link with the drought from the summer of 2012. Last year, the entire Upper Midwest (and more) experienced extreme drought. Quite a few bird species seemed to have poor nesting seasons last year, including those that depend a lot on insects, which includes Ruby-throated Hummingbirds. Perhaps they were not as productive last summer, resulting in fewer hummingbirds heading south for the winter, and of course with even fewer returning north in the spring? 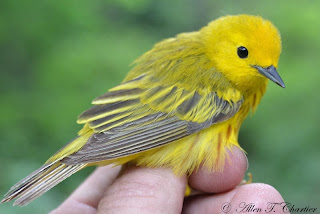 On an entirely different topic, I am long overdue in sharing the banding results from spring banding at my ~7-acre site in Pt. Rosa Marsh at Lake St. Clair Metropark, Macomb County, Michigan. A basic summary of the season is provided below, with a more thorough report to follow sometime this fall.

Banding was conducted on a total of 16 days this spring, which is about average. Three days were canceled, two due to rain and one due to a family health issue. It was wetter than average, and MUCH wetter than last year's drought-stricken spring. A lot of the migration, especially sparrows and thrushes, may have overflown our site this spring. A total of 790 birds (2nd highest since 2004) of 68 species (highest since 2004) was banded, though the overall capture rate of 78.8 birds per 100 net hours was only the 5th highest since 2004. The 20,000th bird banded since 2004 was captured on the second to last banding day (June 7), an after second-year male Yellow Warbler shown above. Here is the species tally, with unusual species in all caps, and number per 100 net hours in parentheses. Significant misses this spring included Yellow-bellied Flycatcher, Black-throated Blue and Mourning Warblers, and White-crowned Sparrow.