Banding the first half of May had some challenges, and many rewards. The first day we planned to band, May 5, was rained out and on two days the park opened late (15-20 minutes), so we got a later start than we'd planned. And the rain also replenished the puddles and mud that we dealt with all during April. Once again, it was hard to distinguish the Channel Net lane from the channel itself! Wind was also a factor every day, even forcing us to close early one day. Luckily, it was possible to schedule a "make up" day of banding to keep to the protocol. A total of 434 birds was banded in 5 days of effort. 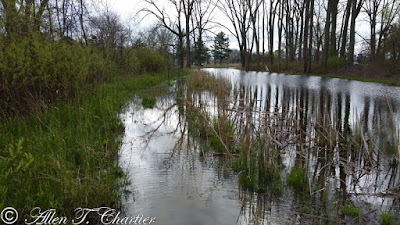 Highlights of the 55 birds of 18 species captured on Saturday, May 6 included a Solitary Sandpiper that perhaps not surprisingly was caught in the Channel Nets!


Among the four Ruby-crowned Kinglets banded today, this female was unusual because of the white spots in the crown.

Highlights of the 49 birds of 18 species captured on Sunday, May 7 included the first female Blue-gray Gnatcatcher of the spring, told by her less prominent black over the eye.

It has been easy to take Red-winged Blackbirds for granted this spring. Last year, we banded 138 of them, but we reached 200 this week and still going strong. Of course most birders are well aware of the black body plumage with red and yellow wing patches of the male, but they might not be aware that it takes them two years to attain this plumage. We band lots of second-year males that might appear unfamiliar. They are not brown and sparrow-like, as the females are, but they do have a lot of brown and pale edging on their upperparts, and the shoulder patch varies quite a bit at this age, most often being orange with black spotting...and the yellow edge to this patch is usually absent.


Sometimes, something truly enchanting happens with a bird in-hand. I encourage you to watch the short video below of this after second-year male Baltimore Oriole. Make sure your speakers are turned on.

Interesting birds observed, but not banded, again included the American Bittern calling from the North Marsh, as well as a Solitary Sandpiper in the Meadow Loop trail. We didn't see the sandpiper well enough to determine if it was the one we banded yesterday. We also had a larger flock of Cliff Swallows today, as well as a Purple Martin which, sadly is becoming more rare in our area.

Highlights of the 63 birds of 26 species banded on Friday, May 12 included the first Ruby-throated Hummingbird of the season.

The first Veeries of the season (3) were a sign that perhaps it would be a good spring for thrushes.

Two Rose-breasted Grosbeaks were in the net together; with this second-year male showing mixed brown and black flight feathers characteristic of that age.


The large crushing bill of this species makes banders cautious when extracting them from mist nets!


Interesting birds observed, but not banded, included a Blue-gray Gnatcatcher right above the banding table, and a singing Carolina Wren.

Highlights of the 154 birds of 34 species captured on Saturday, May 13 included three Ruby-throated Hummingbirds, and it was a very good day for flycatchers and thrushes, but not as many warblers as might be expected by this date.


Several Least Flycatchers were heard singing all day long in the banding area, and a total of 8 were banded. In a difficult group-, this species is fairly easy to identify by its large white eye ring, and relatively short bill and grayish tones to the head and greenish back. Five "Traill's" Flycatchers were captured, with four of them keying out as Willlow Flycatcher. The overall brownish-olive tones on the head and back, fairly prominent white throat, larger bill, and indistinct buffy eye ring all help to identify Willow/Alder (Traill's) Flycatchers.


Among the few warblers captured today, the season's first Orange-crowned was perhaps the most unusual.


Always a favorite, four Magnolia Warblers were among the 46 warblers of 7 species captured today.

Highlights of the 107 birds of 37 species captured on Sunday, May 14 included lots of warblers (57 individuals of 16 species), but it was interesting that almost none of the flycatchers and very few thrushes from yesterday were in evidence. Among the three Black-and-white Warblers banded today was this second-year male, aged in part by his white-speckled throat.


A singing male Black-throated Green Warbler told us the species was in the banding area, but we captured this female instead (note whitish, not black throat).


Surely the most stunning bird of the day was this adult male Cape May Warbler, the first I've ever banded in spring (and it is very uncommon in fall).


The Cape May is a spruce budworm specialist, so historically has been prone to boom-and-bust population cycles. But control of this native pest in the Canadian Boreal Forest seems to have eliminated the "boom" part. Its slightly longer, slightly curved bill might come in handy for poking into flowers to drink nectar on its West Indian wintering grounds.

Today was an interesting mix of early and late warblers, with Yellow-rumped and Palm alongside later species like this first Wilson's Warbler of the season.


The rarest bird banded today was this adult male Connecticut Warbler, which was a bit earlier than expected, and only the 3rd ever banded in spring in the park (first by me), and the 19th overall (my 11th).

Banding on these 5 days could not have been possible without the help of the following volunteers: Sandy Cohen, Stevie Kuroda, Matthew Porter, Anne Ross, Edie Schmitz, Holly Todero, Bruce Watson, and Blanche Wicke.

During the last half of April, banding was done on only 3 days, as one day was rained out. It has been a very wet spring so far! The three days when we did band were fairly nice days, with clear skies and fairly warm temperatures, though with some problems with wind.

Saturday, April 22 was Earth Day. It was also planned to be a National day of protest, the "March for Science". Since I was banding, I made up my signs (from the Union of Concerned Scientists), and posted them on the banding station for the day. So, I did what I could... 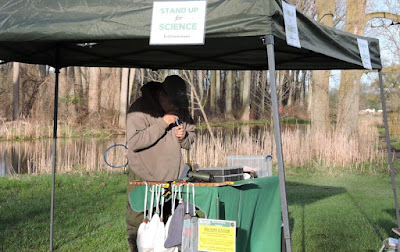 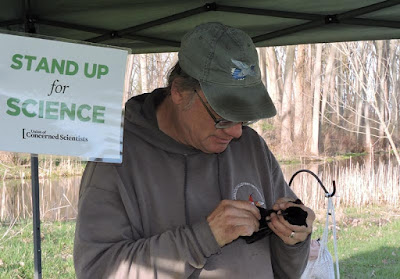 Highlights of the 80 birds of 16 species banded today included the recapture of a Hairy Woodpecker, a species that is very infrequently banded in the park, which was originally banded here in 2015.


Another infrequently captured species is White-breasted Nuthatch. We probably don't catch many here, nor at the former location in Point Rosa Marsh, as the nets are generally not near very many larger trees, and the nuthatches don't spend much time in shrubby habitat.


An excellent number of Ruby-crowned Kinglets (18) was banded today, and it was a bit of a surprise to catch the first Yellow Warbler of the season which was record early by one day.


Another, more expected species of warbler was also captured today, two Palm Warblers. Based on the measured extent of chestnut on their crowns, which has a limited reliability, one was a male and one was female.


By noon, the wind had become a major frustration, even blowing my "Stand Up for Science" signs off the canopy, even hurling one at high speed right at my head! A minor frustration was a Belted Kingfisher that flew up and down the channel, eventually landing on one of the poles holding up the mist nets...

Interesting birds observed, but not banded, included the continuing American Bittern calling from the North Marsh (and possibly a second bird calling from the South Marsh), a Sandhill Crane flyover, and 2 Golden-crowned Kinglets which were somewhat late.

Highlights of the 49 birds of 16 species banded on Sunday, April 23 included the first Blue Jay of the season, as well as the first House Wren banded, although one has been singing in the banding area since April 2.

Highlights of the 106 birds of 21 species banded on Friday, April 28, included a bunch of Blue Jays (10), and the first but perhaps overdue Blue-gray Gnatcatcher of the season.


It was also a good day for sparrows, with Swamp (6), White-throated (14), and the first Lincoln's (3) of the season. Lincoln's Sparrow will always make the photo highlights on my banding blog, as it is one of my favorite sparrows no matter how common they can be.

Interesting birds observed, but not banded today included a calling American Bittern, this time only from the South Marsh, several flyover Gadwall, a Cooper's Hawk in a display flight, and singing Warbling Vireo, Black-throated Green Warbler, and Baltimore Oriole.

Posted by Allen Chartier at 11:59 PM No comments: